In our motorcade…. Just drove past the Jubilee House.. this is where the President of Ghana works… #ghana
Headed to the palace compound for a welcome dinner!! #ghana
Spicy chicken and fries.. nice first meal…#ghana
The money of Ghana: Cedi…..
Out here on these Accra streets …..#global
The office of the President Of Ghana….#accra
Posted on February 27, 2020 by afropopradio

The Kora is a fascinating instrument. Its melodic sound is the centerpiece to music coming from the West African regions of Mali, Senegal, Gambia and others. But what most don’t know is that the Kora players are also griots – storytellers. The craft of playing the Kora is passed down from generation to generation, as are the stories and skill sets necessary 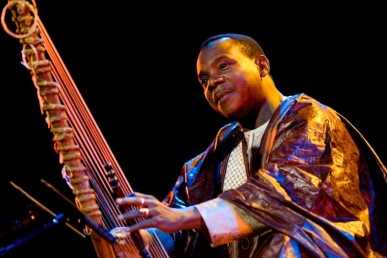 to express the prose of the regions. The Diabate Family of which Toumani is pictured here, spans more than 70 generations of kora players and griots. There are others but certainly the Diabate family remains one of the most prominent.

Jarabi is one of the kora’s most famous and popular compositions. It was composed during the 60’s when the Mali Federation – the region made up of Senegal, Gambia and Mali – was demanding its independence from France. One of the main tenets of the liberation movement was to preserve and maintain the arts and culture of its people. When France was forced out of the area, they tried to convince the government that they could still be a part of France as a commonwealth nation. The ruling parties refused because the people were so vexed by the brutality of French rule, they just wanted out. General Charles DeGaulle was furious. He began a “scorched earth” policy as the French retreated. His armies burned buildings, ransacked towns, destroyed artifacts, killed people. In the end, the nations were left with much of nothing, almost worse off than they were before colonization. Jarabi is a song that encourages the people to stand up, keep proud.. have hope and resolve. Because they will overcome …..

Jarabi- a song of hope.